Our focus at ExxonMobil is providing affordable and reliable energy while reducing greenhouse gas emissions. In the past few months, there have been dramatic changes in the market for LNG, or liquefied natural gas, both in price and regional demand. For those of you who don’t know, LNG is natural gas that has been cooled to a liquid state which enables us to safely transport it to customers around the world.

I shared ExxonMobil’s progress on plans to nearly double our LNG production by 2030 recently at the World Gas Conference in Daegu, South Korea. As I shared in Daegu, natural gas and LNG will continue to play a key role in reducing emissions by taking the place of higher-emissions sources like coal throughout the energy transition.

The power of natural gas

Natural gas is a versatile, abundant, lower-emission fuel which requires extensive infrastructure to super cool it to create LNG, transport it from production site to markets around the world, and then return it to its natural gaseous state gas to transport via pipeline to consumers. Continued investment in new and expanded infrastructure is required to support availability of stable, secure supplies around the world to help economies grow and reduce emissions.  We are seeing this play out in the global markets today with the current tight supplies and high prices due to low investment during the pandemic. And recent geopolitical events have exacerbated the impact.

At the same time – from the U.S. to Africa, Asia and the EU – demand for reliable energy with lower emissions is soaring. And that’s where natural gas can continue to play a big role because power generated from LNG instead of coal has only half the greenhouse gas emissions.

According to the U.S. Energy Information Administration, in the U.S., fuel switching from coal to natural gas led to a 14% reduction in greenhouse gas emissions from 1995–2020, and the country’s electricity sector achieved most of its CO2 emission reductions from 2005 to 2019 by switching to natural gas from coal as a fuel source.

Unfortunately, developing countries and emerging economies continue to use coal for power generation. In fact, nearly 40% of the world’s electricity is still generated using coal, according to the World Coal Association.

Clearly there is opportunity around the world to achieve meaningful emission reductions by switching to natural gas. This is the thinking behind our plans to grow our LNG business. We are also evaluating other opportunities to use LNG to reduce emissions, including combining LNG with carbon capture and storage to deliver low-carbon solutions such as hydrogen to help address hard-to-decarbonize sectors like industry and transportation.

ExxonMobil’s Advancing Climate Solutions 2022 Progress Report outlines our net-zero ambition for operated assets by 2050 and plans to invest more than $15 billion over the next six years on initiatives to lower greenhouse gas emissions. Part of our plans include lower-emissions natural gas and LNG.

A path forward with partners

We have made great progress and secured strong partnerships in the U.S. and around the world that will be critical to making our growth plans a reality. 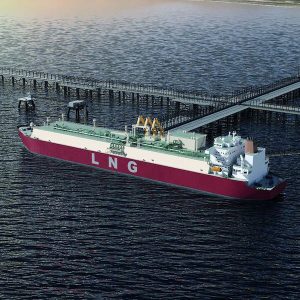 Efforts include a floating LNG plant that recently started producing in Mozambique, construction of a LNG terminal in Texas that will start producing in 2024, and expansion of LNG production in Papua New Guinea and Qatar. The U.S. terminal, at Sabine Pass on the Gulf of Mexico, will export 16 million metric tons of LNG a year, which is enough to generate enough electricity for nearly 10 million households.

Increasing the global natural gas supply is a priority of the U.S. and other government leaders around the world as stress on global demand continues.

Governments are taking action by approving necessary LNG project permits and looking to remove regulatory obstacles. These efforts will enable additional natural gas supplies to be produced for society’s needs and help the world lower its emissions.

Through these LNG opportunities, government support and strong interest in financing LNG projects across the world, we are optimistic and confident that LNG will continue to be an important part of our business as we support a lower-emission future. What is Natural Gas?

Natural gas has played a major role in powering the modern world. Paving the many paths towards an energy transition

Navigating the energy transition is a global effort that involves everyone doing their part, from major nations, policymakers, industry and each individual consumer.